skip to main | skip to sidebar

The rune of Biel-tan stands for the principle of reinincarnation, a fate thought to be reserved for every Eldar before the Fall. The name of the craftworld means "rebirth of ancient days".

Musings on the meta game.

There are too many space marines. Space marines are supposed to be the ultimate elite of the imperiums warriors, a rarely seen army that uses shock tactics and lightining fast strikes to achieve their objectives. However all too often they are what we see across the table. It seems that whenever GW thinks of warhammer 40k, they think of space Marines. How many marine codexes are there? How many different elder craftworlds are each represented with a codex? How many different imperial guard codexes are there? It seems to me that space marines are what GW envisage as the standard army in 40k and all other armies are to be compared to them. This is represented in what we see on the table: the majority of the time it Is some form of marines and often in tournaments Marines will end up fighting each other. And these are not marines as they should be either: where are the drop podding shock armies, where are the cunning tactical manoeuvres that the fluff advocates? You might say that marines are cool, that they are the ultimate heroes, that they are the reason hobbyists start. To you I cry bulshit. They are only cool as long as they are rare and as long as the rules represent that they are the elite. With proper advertising other armies could become warhammer 40k's poster army. The imperial guard are the long suffering stoic defenders of mankind. Ordinary people defending terra from unimaginable horrors. Tyrannids are the ultimate aliens: if they don't represent a futuristic fantasy then I don't know what does. Marines have another problem too: because they are so popular they lose all their glory. When everyone has space marines they are no longer the ultimate defenders of mankind, whole levels above the rest, they are just the average. Space marines are not fun to play against: the game is fun because of the variety. When all the time you win just by popping rhinos it makes for a dull shooting match.
I believe that marines should not be the main army of 40k. The first army a novice should be introduced to should not be the ultramarines, it should be say the imperial guard, the typical defenders of mankind. The space marines should be reserved for the skilful player who wants a difficult but rewarding army to play. This should be reflected in codex writing: the imperial guard should be easy to learn but should not be top tier whereas space marines should be as dark elder are now: very difficult to master, but incredibly powerful when used correctly. I think this would make for more interesting games as a larger variety of armies were used and it would allow marines be as awesome on the table as they are supposed to be.
Maybe I'm just an idealist: maybe the game will never reflect the fluff, however it seems to me that the prevalence of space marines has gone too far: it is making the game boring and stopping many armies from beirng able to live up to their background.
Posted by Jo at 09:46 2 comments:

You remember I was previouly talking about using my anti horde 500 list against everyone? well I now do that...... sort of. There's been a few changes:

Essentially ive just dropped a jetbike. However, when playing MEQ's I drop the eltritch storm, change the missile launchers to bright lances and use the spare points to get spirit stones on the wave serpent. So in fact all I've really done is made a "version 2" of both my original 500 point lists!
Posted by Jo at 14:23 3 comments:

You may remember how I originally had specialised lists for 500 points but then decided to only use the anti-horde one. So a repeat here surely? Another specialised list? Well you see, I think that the extra 500 points is going to allow me to take more specialised aspect warriors which being biel-tan I shall do. However with the eldar being as specialised as they are i feel 1000 points is not enough room to have enough variety to deal with everthing. Fear not: i am planning a 1500 point list which will be able to take on anyone. So, my 1000 point anti MEQ list:

Troops
10 Dire Avengers: including an exarch with two catapults and bladestorm 152
Transport: wave serpent with TL brightlances and spirit stones. 145

3 Jetbikes: one with shruiken cannon. 76

Heavy
4 Dark Reapers: one is an exarch with tempest launcher and crack shot. 182


I have all the models for this and they are now sitting waiting to be painted (done primer). I'm considering dropping the shruken cannon off the jetbikes and getting more vehicle upgrades, since they normally just hide anyway, but then thats more painting. War shout is in there just for the comedy factor. plan is: banshees and reapers die, and then control and contest with wave serpents and troops choices.
Posted by Jo at 14:16 1 comment: 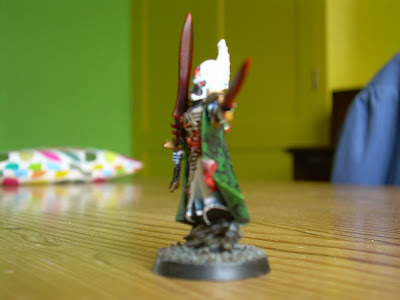 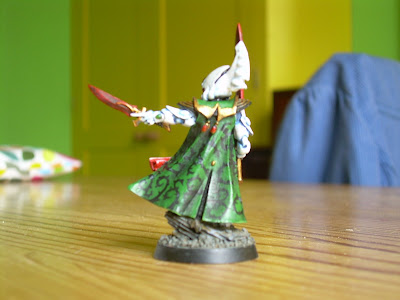 This is another model I've actually finished! hes actually been sitting around for a while and its only recently I got round to adding the runes (at bottom of robe, at front, can't see them very well), and the thorns on his cloak at which point I decided I was done with him. He was the first model I tried blending on, and as leader of my army I feel he has been given due care and attention: I am pleased with him.
(sorry its been so long since my last post)

Thorns or no Thorns? 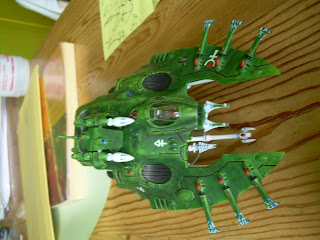 This is my wave serpent, finished (However, I havent glued it yet , if you look closely you can see the blue tack holding it together. this is because I much prefer painting models apart so you can get to the fiddly bits easier). I am very proud of it, particularly the shading and my self designed energy field (blue lighting, then thinner white lightning on top. It took quite a lot of experimentation to settle on this). However this is the big question: should I paint thorns on it like my jetbikes or leave it as it is now and not risk spoiling it? What do you think? I'm leaning towards just leaving it as it is. 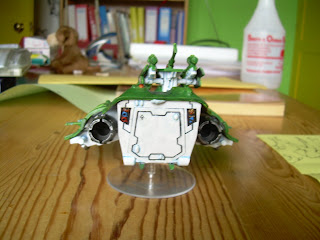 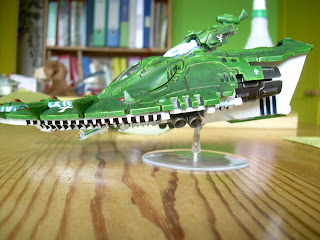 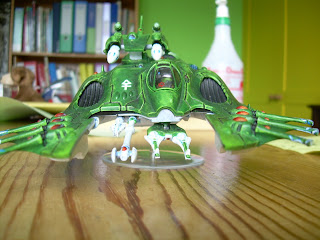 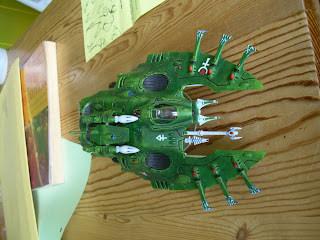 I have mentioned before how reserves have really helped me out in my battles. Increasingly I am finding that reserving my jetbikes has several advantages. Normally the disadvantages of reserving something is that you don't know when its going to arrive and that its going to be doing nothing for at least a turn, possibly more. However, I use my jetbikes purely as objective grabbers and possibly a little harrasment if I'm lucky. Their purpose is to not die until turn 5 at which point they go and claim an objective (alternitively, in KP missions their purpose is just to not die, and to fill up my second troops slot.). To this end, where better place to protect them than off the table? Sure, they can't hurt anything but they were hardly going to do anything anyway, and best of all my opponent can't hurt them for up to 4 turns! I know some people might play jetbikes in a more aggresive way, but this is how I use them and so far reserving them has worked well.
(NB: I am talking about my anti horde list here which Iam considering using for everything. Any thoughts on this?).
Posted by Jo at 13:24 No comments:

Mission was seize ground with pitched battle deployment. i was using my anti horde list in a fit of madness, but without eltritch storm. What do you think of this format for a battle report? 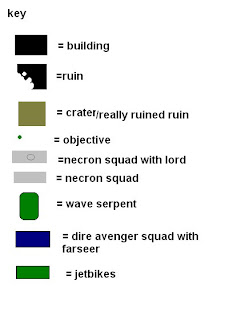 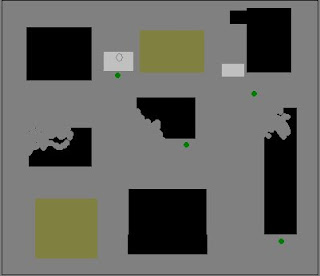 Turn 2
(during his turn 1 he just moved up so ive included that in this picture and skipped straight to turn 2) I shot plasma and next turn he self repaired the single wound it caused. 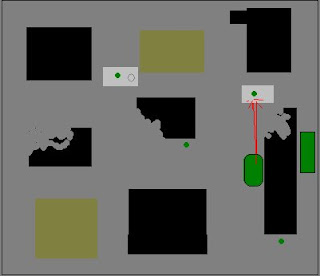 Turn 3
Guided dire avengers shot doomed squad. Everything shot the squad and wiped it out. 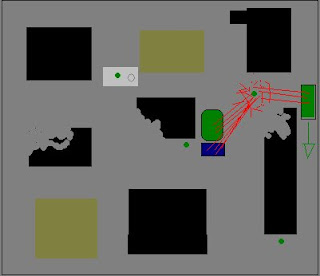 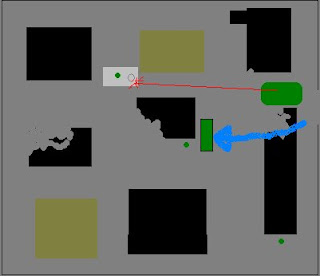 Turn 5
wave serpent turboboosted to contest and jetbikes shot to no effect before claiming another objective during their assault move. Roll a 3 so game continues Turn 6
necrons rapid fired my wave serpent before the lord assaulting. did no damage thanks to 3+ cover save from turboboosting and only hitting on 6's in assault. Wave serpent turbo boosted back to claim a different objective jetbikes did same as last time. game ended on a 1. 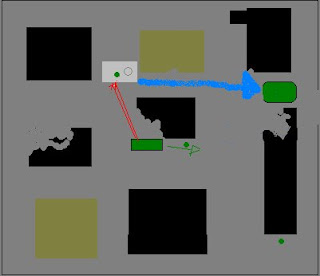 I think a wave serpent with dire avengers and a farseer works really well, and i am even considering completely scrapping my anti marine 500 point list and just using this one. I think that mech is the way to go and 3 reapers really isnt worth it. Any thoughts?
Posted by Jo at 06:30 4 comments: